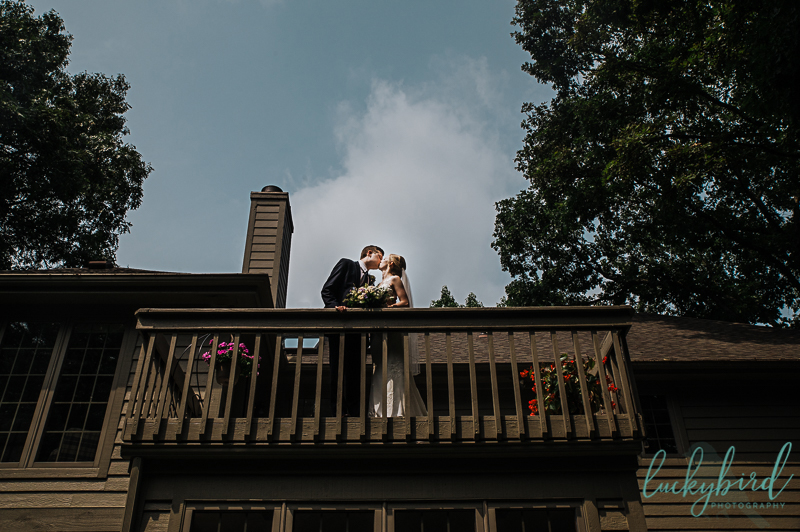 Megan and Bill met their freshman year at Miami University in the dorm where Megan lived. Bill became friends with some guys who lived in my dorm and was frequently there with those guys. Those guys were mutual friends for both Bill and Megan and that is how they started hanging out. The rest is history!

Their proposal occurred the weekend after Valentine’s Day when Bill made dinner reservations. He told Megan that before they went to dinner that he wanted to stop at all of their favorite parks along the way. The last park they went to before the restaurant was their favorite, one where you can see the skyline of Cleveland in the background. They started taking a walk and, in Megan’s words haha, “he asked this creepy looking man to take our picture. The creepy looking man in the hood and sunglasses (it was a gloomy February day which is why it was creepy) ended up being his best friend/cousin Mike who is his best man! He wasn’t so creepy after I realized why he was in disguise! He got pictures of the whole proposal! After the proposal, my parents were suddenly there and had been watching the whole thing from the parking lot! Then we went to dinner with my parents and Bill’s parents met us there. It was such a lovely and unforgettable day!”

Their wedding was elegant and romantic with a blue color scheme. The men were in navy blue tuxes while the bridesmaids wore three different shades of blue. There were also accents of gray/silver. Their reception was adorned with draping, lights, and an Edison bulb backdrop. Congrats, Megan and Bill! I wish you two the very best and I am so glad you got to have the perfect wedding day after another whole year of waiting!