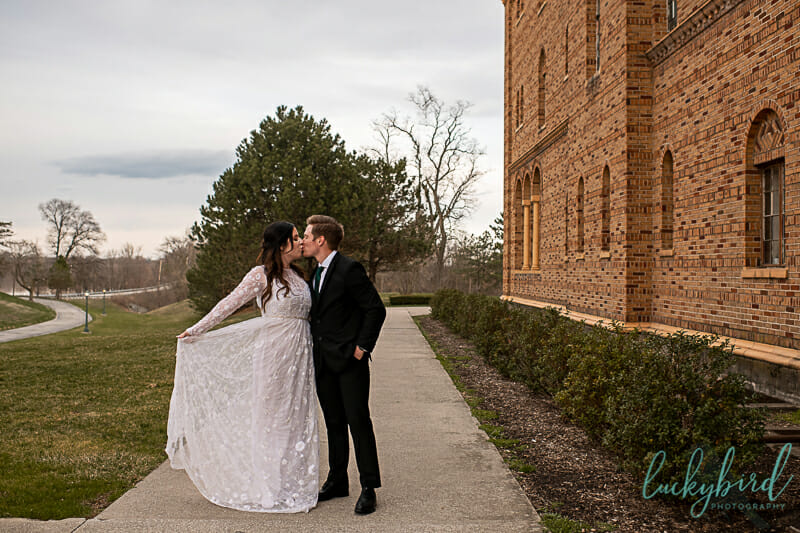 Ashley and Andy had a two-part wedding between November and March and it was an honor to see them and celebrate with them twice! Their ceremony took place back in November back when the COVID restrictions got more strict and moved their reception to last Saturday. They were both looking forward to the party so much and I am so glad they were able to have this beautiful reception as well as a beautiful ceremony.

Ashley and Andy met in a journalism class in high school and Andy gave a speech during the reception where he talked about how one of the first things he did was mispronounce her last name. She quickly corrected him and the whole thing stuck with Andy and they kept talking. They fell in love and Ashley said she knew Andy was the one when she spent the entire night talking with him on his 21st birthday.

For the proposal, Ashley got home from barre and was stressed thinking about the work week ahead. As she walked into the house, she realized there was something red on the floor – naturally assuming their dog, Charlie, had gotten in the trash, scattering it across the house. Upon further inspection, the red on the floor was actually roses!

She quickly started assessing the rest of the house – lights dimmed, dinner made, Christmas tree lit. Andy came around the corner with their other dog, Louie. He had fastened the ring onto Louie’s collar and assumed Louie would run up to Ashley as soon as she walked through the door, as he had done every other night. Louie, however, had other plans and could not be bothered to greet her. Since Louie was running amok, Andy chased him down so he could ultimately ask her, with the ring.

With the ring, Andy was finally was able to get down on one knee. Tears were streaming down his face, and Ashley swears she legitimately still couldn’t tell you what he was saying. Shortly thereafter, she finally grasped what was going on, and, in true form, she interrupted him by asking, “Are you asking me to marry you?!”

These two were just such a dream to photograph. We listened to emo music for their engagement photos and just got silly and weird and their wedding was fun, intimate, and so chill. I loved every moment and I cannot wait to hear everything the future brings these two: