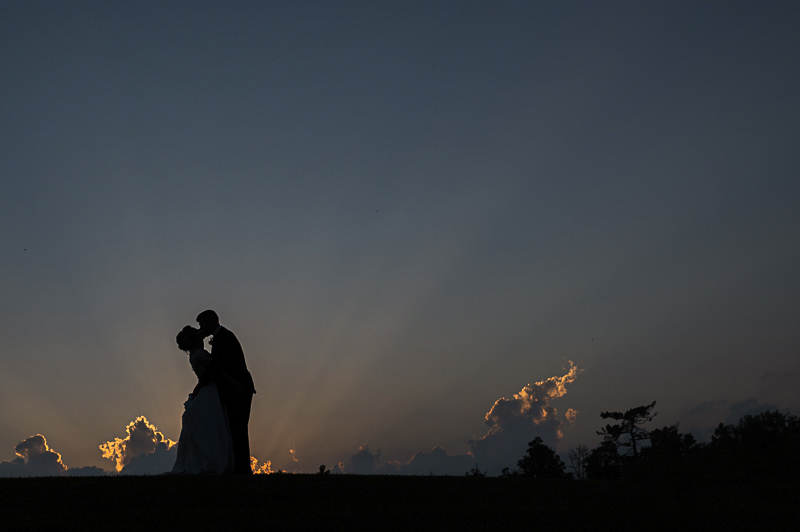 This past Friday, Michele and A.J. got married at Nazareth Hall. The pair met at Precision Steel when Michele started working there in April 2019 (A.J was her boss!). The forecast called for rain during the ceremony and late in the evening when we were planning on sunset photos of the couple. I was so happy that from the time we arrived until 90 minutes before the ceremony began, that the forecast completely changed and Michele and A.J. were able to have their Grotto ceremony! We were totally prepared to have them get married down there and, if need be, book it back up the hill to escape from the rain. I am so glad that wasn’t an issue at all! And then, we actually did get our sunset and it was AMAZING! The sun’s rays peeked through the clouds and just made for such a fairytale ending to such a beautiful day!

The proposal was a surprise that A.J. planned at Toledo Botanical Garden. After getting permission from Michele’s mother, he used Michele’s brother to scope out the place the weekend before and then staged the spot. Her mother and brother ended up hiding out in the trees and captured the moment on camera.

A.J. pulled off the proposal by saying that he had reservations at a local restaurant. After they arrived, he said that he misread the time and it was actually reserved for an hour later. He took Michele over to Toledo Botanical Garden to “kill time and walk around”. He guided her to “the spot” and popped the question. She said YES!

Michele and A.J. had a romantic and elegant wedding featuring lavender and lilac as well as greenery for a nature-like vibe. I really enjoyed their cake topper, which included all of their animals as well as a silhouette of the couple, and Michele’s dress! Michele’s dress came from her Aunt, who, unfortunately, never got to wear her wedding dress back in the ’80s. That dress was kept and preserved and later, Michele showed interest in it. After a sleeve alteration to de-pouf, the dress was modernized and Michele looked absolutely stunning in it.

Congrats, A.J. and Michele! It was such a perfect day and it was an honor to celebrate with you and capture all the joy!

See photos from Michele and AJ’s wedding below: