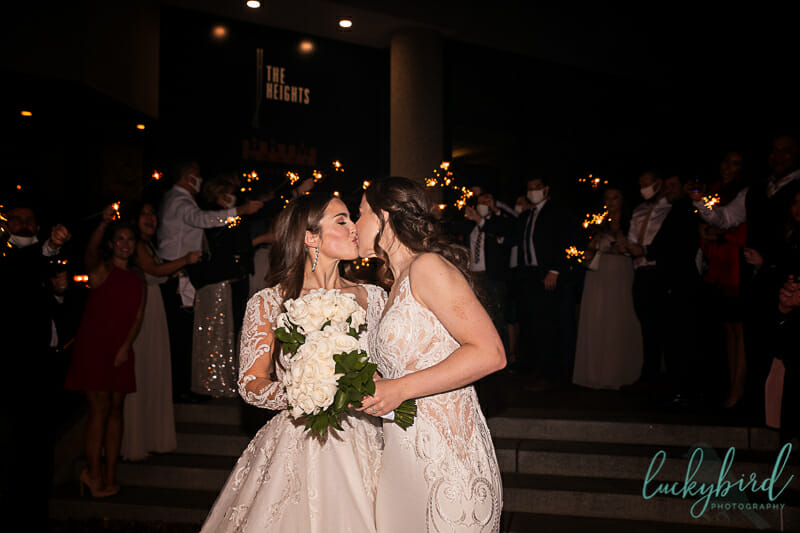 Over seven years ago, Kallie was working at Victoria’s Secret when Meredith walked in. The two started up a conversation and realized they both went to the same high school (one year apart) and never knew one another. After that meeting, Meredith slide into Kallie’s DM’s and the rest is history!

On September 15, 2018, the pair were in Palm Springs to celebrate their dating anniversary. Meredith is the planner between the two, so she had places scheduled for them to go and check out. Kallie said she had ZERO idea that Meredith was going to propose until about two minutes prior to it happening. The couple went to the Indian Canyons and were just walking around, taking pictures and chatting when Kallie suddenly had the thought cross her mind, “MAYBE she will propose?” Nahhhhhh. Kallie and Meredith were standing on a mountainside and Kallie wanted a picture of herself looking off into the view and when she turned around after the photo was taken, there was Meredith down on one knee to pop the question. Kallie cried and said yes!

Their wedding was elegant with lots of candles, cloth draping, pink uplighting, and a neon sign above their head table. Their head table, by the way, was a large gorgeous couch adorned with stunning florals. Florals also played a major role in the ceremony arch as well as the reception ceiling. The colors for the wedding were white, cream, and shades of light pink, and it looked absolutely beautiful.

One of my favorite parts of the day was seeing Meredith walk down the aisle and wait for Kallie. There were so many emotions from Meredith as Kallie walked down the aisle and I know Kallie was looking forward to this part of the day the most surrounded by all of her loved ones. I also could not believe the beautiful day we were given when we went to Middlegrounds Park during golden hour – we had the prettiest brides, the prettiest sunset and even had a pretty badass moon make an appearance for their day – totally worth it from their May reschedule!

Congrats, Kallie and Meredith! Your day was absolutely perfect and I just loved everything about it, including your matching veils you had no idea about 😉