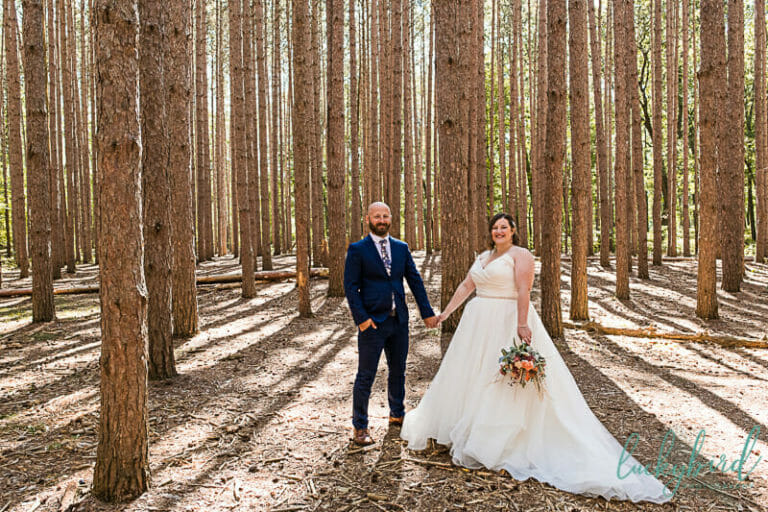 Nicole and Bret met at a goalie camp in July of 2017. Bret was coaching and Nicole’s daughter was attending. She had gone the previous year as well and had talked him up as her favorite coach there. So when the two finally met, he mentioned that Mila had improved a lot from the previous year and had a lot of potential. This led to a conversation of who was she coached by at home and Nicole was added to a Facebook group to try and find her a coach.

At the end of September, Nicole’s boyfriend broke up with her and Bret figuratively became her shoulder to cry on. Nicole said, “we started talking on the phone for hours at a time a few days after the breakup, and he’d do just about anything to get me to laugh. Phone calls became more frequent, and by November we were calling each other after work, after dinner, before bed… but we were just friends.”

A hockey game before Christmas turned into a NYE party while the phone calls continued. On their way back, the pair caught a stop sign as the clock in his truck turns to 12. Nicole kissed him. The rest is history.

The couple originally had a wedding date set for May, but with COVID restrictions, they had a super intimate backyard wedding ceremony and moved their ceremony part 2 and reception to last weekend. Nicole said, “we just wanted something to make it feel more concrete and have more loved ones around.” With colors of navy, peach, desert coral, blush, burgundy, dusty sage, evergreen and gold, they pivoted to more of a rustic elegance theme and added more fall-like colors to compliment the change of seasons.

I just loved the beautiful weather we had with a hint of fall in the air and how wonderful this day turned out! It all came together, even despite some hiccups, and I was so thrilled to be a part of it! Congrats, Nicole and Bret! It was such a perfect celebration at such stunning locations!