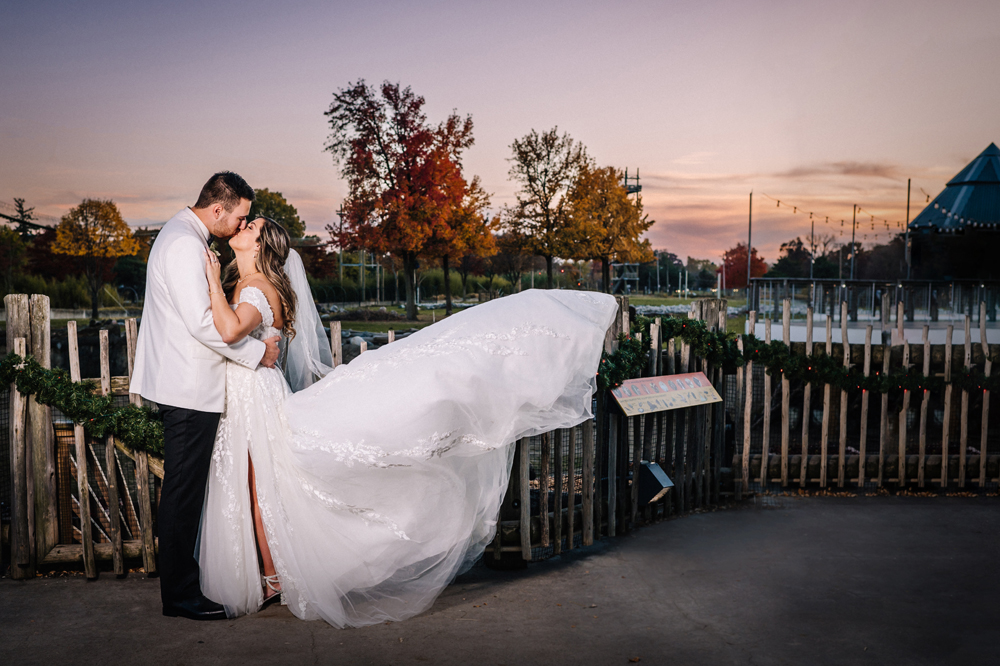 Lexi and Zack had the most incredible day at the Toledo Zoo on Saturday. I was so excited to see the first look between Lexi and her bridesmaids, again with her dad and then finally, with Zack. These two also had a surprise visitor during their cocktail hour – penguins! They had a special encounter with the giraffes plus a sloth and two penguins attended the cocktail hour in Malawi and it was such a fun way to kick off the festivities.

These two met when Lexi had just started a receptionist job. As Lexi told me, “A few months into the job, Zack walked into the lobby and I felt very attracted to him. He came back the next two days because he also thought I was a cutie. He then added me on social media and the rest is history. It really was love at first sight!”

For the proposal, Lexi said, “Zack’s little sister Sarah lives in Pittsburgh and we visit her a few times a year. For this particular time, we were going there to go to the Pittsburgh Steelers game on Saturday. We got there on Friday and got settled into our hotel. Zack told me to get ready for dinner because we were going to a nice steakhouse. We headed to Sarah’s apartment to pick her up and she asked us to come inside because she wanted to take photos at her favorite spot in Pittsburgh which was right outside her apartment. Zack and I started taking photos together and he got down on one knee. I obviously had no idea what he was doing so I told him to stand up, then I realized that he was proposing. I managed to say yes but have no recollection of it because I blacked out. Haha. It was a beautiful place for him to propose and it was a very special moment for us.”

It was an incredible day and we were so happy to be a part of it. Congrats, Lexi and Zack!