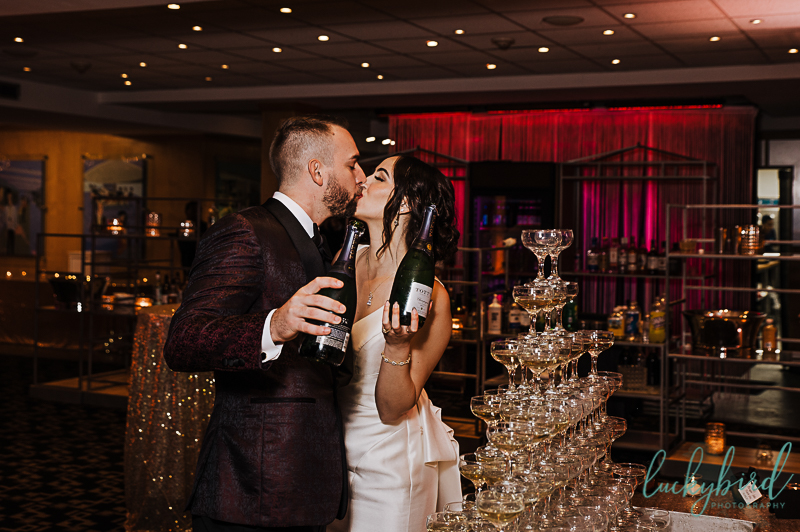 Morgan and Jake had an incredible wedding day after much waiting and uncertainty with COVID. I had a blast with these two for their Detroit engagement photos at Belle Isle and it felt like no time had passed between then and the wedding day!

In a very fitting first date story for these two, their first date was at Dave and Buster’s. They started to play games that were very competitive and as Jake told me, “she beat my ass at them. We collectively earned tickets and we bought something together from the prize shop.” When I asked Jake about the proposal, he said, “It was a random day after work and I was nervous as hell. I had asked two of Morgan’s closest friends to show up for a “dinner” with their significant others. The first two showed up and it wasn’t alarming at all to Morgan but when the second couple showed up, I knew she thought something was up. I had told her I had a surprise waiting for her on this day and I played it off as the second couple showing up as the surprise. I then took her into the living room, told her how much I loved her, and proceeded to grab the ring box I had stashed earlier that day. I got down on one knee and asked her to be my wife for the rest of our days. She said yes!”

The day was filled with music and friends and family – we traveled to The Skip in Detroit and the guys went to several locations around downtown. Their outdoor ceremony was a little before sunset and had the most beautiful light! It also had the weirdest photobomb – a drunken complete stranger on a boat that was cheering and recording the ceremony on her phone – she floated by, turned around, and recorded and cheered more….all during the vows. It was funny and slightly cringey, but I guarantee nobody will forget that! Their elegant reception took place on the second floor of Roostertail and guests watched the sunset and could venture on the outdoor patio to view the downtown Detroit skyline and water fountains with pink uplighting. I loved these two and their wedding was the perfect mix of boujee, Old Hollywood elegant, and non-traditional. I just loved being their Detroit wedding photographer!

Congrats, Morgan and Jake! I wish you both the very best!