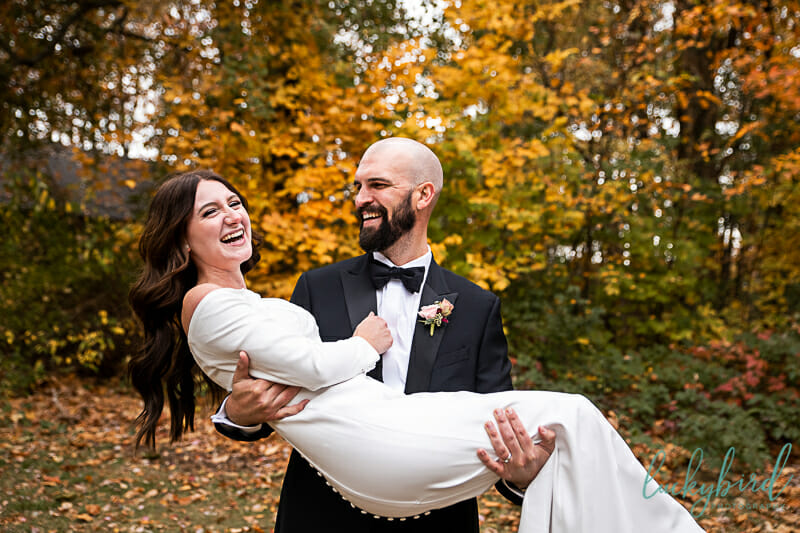 Evan and Katelynn were married on the most perfect fall day at Evergreen Lake at Oak Openings. This was their Plan B due to COVID – their original plan was a larger destination wedding in Hawaii, but the pair opted for a more intimate ceremony and reception with the closest of family attending. I really enjoyed spending time with these two while they got ready together and shared a casual wedding morning in the same hotel room. It’s rare that there isn’t the loud hustle and bustle of a wedding party involved on a wedding day, so it was really nice to just do my thing with just the couple present.

Katelynn and Evan met when Katelynn was going to cosmetology school in Perrysburg. Evan’s family owned the school at the time and Evan worked there. The two started talking more once Katelynn finished school and began working. Evan was living in Toledo at the time and they started going to parks to longboard and just hang out.

The two are both pretty big foodies, and love exploring urban areas. Having lived in Toledo, the Detroit area, and now Cincinnati, they love finding new parks, restaurants, and markets. When they want a little more time at home, they love just relaxing with their pug, Louie.

In November, the couple was in Venice, California for a vacation. On their way up to Santa Barbara on Pacific Coast Highway, Evan wanted to stop in Malibu to check out a beach and grab lunch. The pair stopped at a scenic secluded beach. Katelynn said, “Evan was acting a bit odd, but all of a sudden we’re by the water’s edge and he gets down on one knee. Pretty sure he bumbled everything he was trying to say. I had never seen him nervous before…I couldn’t wait to say yes.”

The couple chose Oak Openings for their ceremony because they both love nature and trees and appreciate fall in the Midwest. Before the ceremony, the couple did some portraits together at The Spot at Oak Openings. After their Evergreen Lake ceremony, they had family photos together and more portraits before heading to The Chop House for their intimate reception. Their reception, consisting of only around 15 guests, consisted of an intimate 3-course dinner and cake, of course! it was a beautiful celebration and an honor to be there! I met Evan in high school and it’s always an honor when people follow me after all this time and choose me to document their day. Evan and Katelynn, I wish you both the very best!