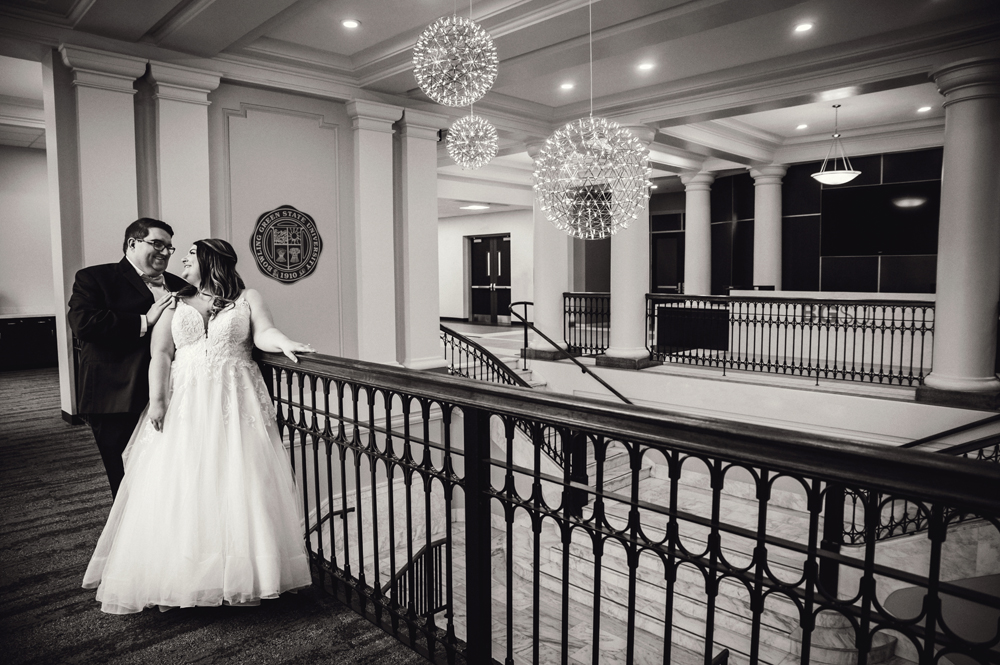 Annie and Dave celebrated twice – once in 2021 and again this past weekend. Exactly one day away from a year was the difference between their intimate ceremony photos at Bowling Green State University in Prout Chapel and their Stone Ridge wedding reception.

Their story begins back in the summer of 2012 in Bowling Green, Ohio. A house party was planned to celebrate the July 4th holiday. The party was going on like any other when Ann and her group of Alpha Omicron Pi sisters made a grand entrance. They burst through the door with beer and laughed about how none of them knew why they were out partying for a second night in a row.

David started talking with Ann’s best friend, Storm Anderson, and Ann joined the conversation about the Cleveland Indians. Within minutes, Annie and Dave had planned a trip to Cleveland for a game later in the summer. Ann offered David one of her Leinenkugel’s Summer Shandy beers and they went outside to join a group gathered around playing drinking games.

As the night continued Ann and David found out that they had a lot in common and that they had gone to rival high schools. David, evidently trying to impress, attempted to convince Ann that he had followed her volleyball career and was a huge fan. When she asked him what number jersey she wore, he quickly replied “seven!”, to which she replied laughing, “close, but it was five”.

As time went on, they found themselves cheering on their favorite sports teams, watching movies, going out to eat, binge-watching tv shows, and trying to spend all of their time together with friends and family.

On Christmas Day in 2019, Ann and Dave were in Cleveland, Ohio celebrating with Ann’s family. The first stop was Ann’s grandparents’ house. David couldn’t sit still, walking from the living room to the dining room, then to the kitchen, and back again. Little did Ann know that he was trying to get the engagement ring out of his coat and into his pocket without her noticing. Once the time had come to pop the question, David tried to get Ann’s sister, Emily, alone for a quick word to ask her to start filming with her phone.

Of course, as soon as David and Emily started to discuss, Ann pops around the corner ready to join the conversation. Luckily Emily is very perceptive and was able to nod and acknowledge she had gotten the message.

Once Emily was in place, David got up the courage to pop the question! The moment was perfect, Ann was completely surprised, Ann’s grandparents were too since her grandmother asked Ann’s mom, “did you know this was happening?!”. To top off the perfect moment, Ann said yes!

Ann and I met back in 2017 when she worked at a local wedding venue and I illegally parked my car in an emergency parking space to load my equipment. I walked off the elevators, probably sweaty, said hey and introduced myself, and threw everything down. I got off the elevator and started my car and…..nothing. Completely dead. So I had to awkwardly run back up there to say hey bestie, my car is dead in that space you have downstairs for ambulances and stuff. Cool cool cool.

Luckily, I still made a great impression and we remained friends, even though I had to have my car jumped…twice. Once to get out of the space and once at the end of the night. I’ve followed her every career move and I was so honored and ecstatic when she asked me to be her wedding photographer. Congrats, you two! What an amazing 2 part celebration! As Dave mentioned in his thank-you speech, this was the best party you ever threw, Ann.