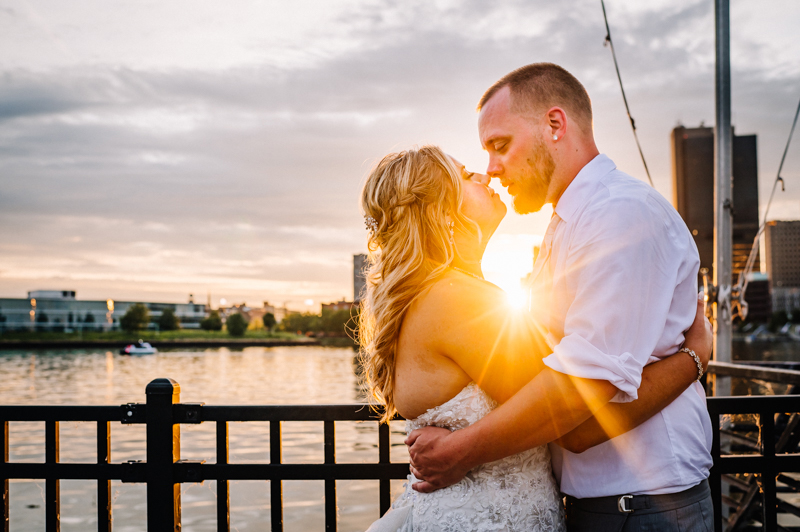 Andrea and Zach had the most incredible day on Saturday! Zach was so filled with emotions and I just loved his reaction when he turned around and saw Andrea and her dad walking down the aisle and the tears he had when he opened his Grandma’s bottle of Crown Royal from 1969 and asked everyone that knew her to take a shot. Their wedding ceremony and reception took place at City View Event Center at the Dock’s and International Park area in downtown Toledo and it was absolutely stunning!

To backtrack a bit, Andrea met her matron of honor, Becca, when the two worked at a bank together in 2009. They became best friends and Becca asked Andrea to be a bridesmaid at her wedding. Zach was asked to be a groomsman for Becca’s now-husband Josh and Andrea was paired with him for the wedding day. They met for the first time at the bachelor/bachelorette party in September 2012. Things kept going between them because they started dating shortly after the wedding of Becca and Josh and have been together since!

In December 2020, the couple took a trip to Hocking Hills. Andrea said, “One of the walking trails was to Cedar Falls and there wasn’t much traffic on this trail, although we did notice one other couple behind us. When we got to the falls, I took a few pictures and the couple behind us caught up to us and Zach asked the woman to take our picture. She snapped several photos and was going to hand his phone back to him, but then he asked if she could take one more. She looked confused but agreed to take more and he got down on one knee and asked if I would marry him! I said yes (of course) and we have a ton of photos of that moment we can cherish forever.” So cute!

After the ceremony, the couple went to Promenade Park for some fun wedding party and couple photos. One thing I love about City View is they provide boat rides across the river as a huge fun perk. We had some fun there before the reception and then went out before we left for some sunset photos. It was such a gorgeous sunset and kept getting prettier by the minute. Congrats, Andrea and Zach! It was such an honor being a part of your day!