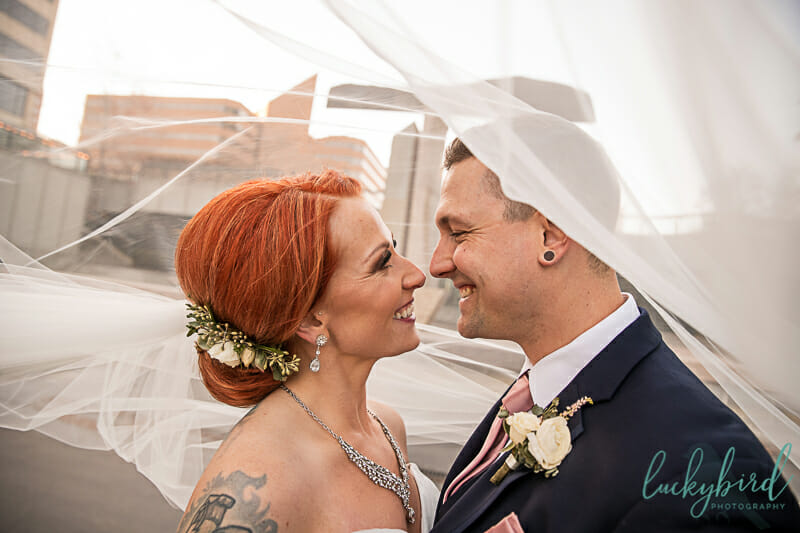 Ashley and Brendan were married in early November on one of the prettiest November weather days I ever remember having for a wedding! The weather was gorgeous, in the ’70s, and they just had the best luck as we photographed their first look, portraits, and wedding party photos outdoors that day. Their ceremony as well as their reception both took place at the Renaissance Hotel in downtown Toledo.

Their overall colors were navy and dusty rose and they wanted a whimsical and romantic vibe for their day. The couple got engaged at the Kusama exhibit at the Toledo Museum of Art and used whimsical lighting inspired by that memorable day.

Ashley and Brendan actually matched on Tinder three years before they ever messaged. Ashley decided to get back on the app after another dating hiatus and update her account with new photos. Brendan liked one of her photos and after Ashley messaged him, they texted for a few weeks.

They finally had a sushi date planned but Brendan had forgotten about a wedding he was supposed to go to and canceled the date. Ashley practically wrote him off, as she had had many first date disasters and she didn’t want to keep putting herself out there. They both went on with their lives for a few weeks, texting here and there, but things went a little cold. Ashley went to her usual Tuesday sand volleyball game after having a busy day of yard work and cleaning.

Ashley was awkwardly walking out of the port o potty using her elbows when she heard a voice shout, “Ashley?”. She looked around, wondering who the heck was calling her, and when she saw his smile, she knew. They hugged hello and shared a quick conversation but went about their volleyball games.

Ashley sent Brendan a text asking to hang out after the games for food and drinks with teammates. They had tacos and margaritas and didn’t want the night to end yet. So they then stayed out at a local gay bar playing Euchre until 2 am, even though they both had to work early the next morning. They hugged good night and after that, they never stopped making plans.

Their wedding day was absolutely amazing – Ashley and Brendan, I wish you both the very best!